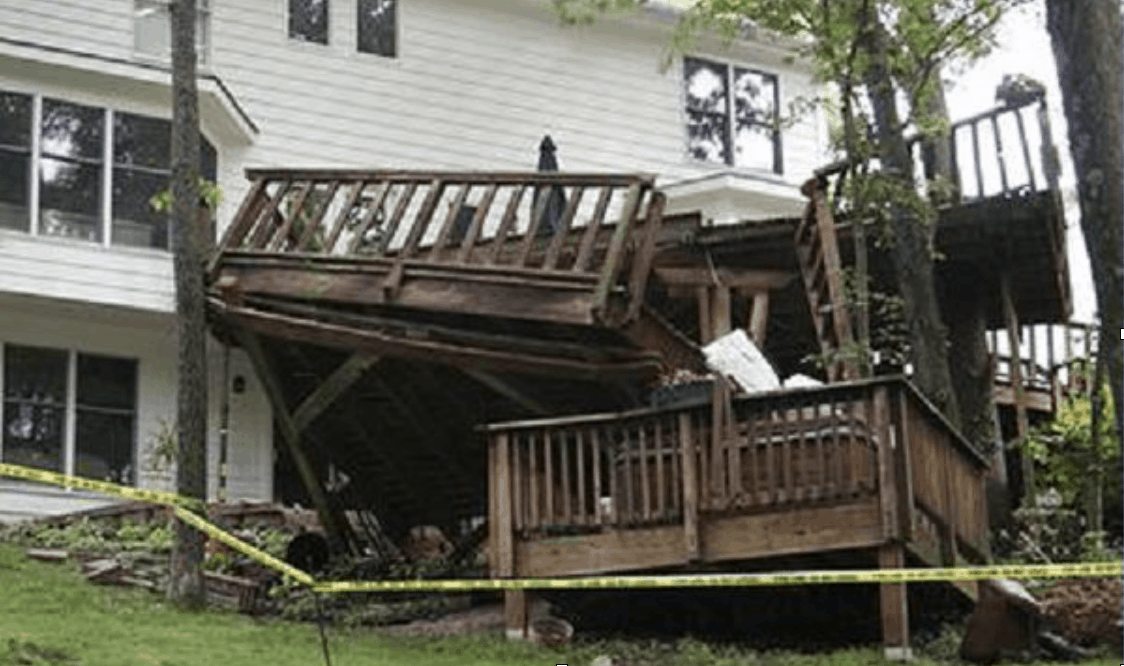 With the pandemic keeping you home, you’ve got a lot of time on your hands. And your thoughts have wandered to building that deck you’ve always wanted. You’re thinking, maybe with enough internet research and ingenuity, you can skip the cost of a professional and figure out how to do it yourself. How hard could it really be?

But the better question to ask isn’t how hard it is to build a deck, it’s how much could a deck cost you if it’s not built properly?

The Dangers of Deck Failure

Skimping on the cost of hiring a licensed contractor could save you money upfront, but it introduces big risks down the line.

Not everything’s about money. When a deck is built improperly, you put you, your family, and any guests that come to your home at a real risk of injury, or even death. The Consumer Product Safety Commission estimates that up to 2,900 injuries between 2016-2019 were due to the collapse of failed decks.

While the severity of the injuries that may come about from a bad deck vary, any amount of pain and suffering is too much. The whole point of adding a deck to your home is providing your family with a new space to enjoy. If instead they end up with a broken bone or serious wound, you’re trading joy for physical pain and hospital bills.

You’re better off not having a deck at all than building one that could put your family at risk.

Even if no one gets injured, if your deck collapses, you’re going to have to shell out money to fix it. In most cases, a skilled contractor won’t be able to make the deck you have safe—they’ll need to tear it down and start from scratch building a new one. That means you’ll be paying the full cost of a professionally built deck anyways, the original expense you were trying to avoid by cutting corners. You’re better off spending that money from day one, rather than compounding your costs.

And because a failed deck comes with the risk of injury, it’s not the kind of problem you can wait and save up to deal with. It will need to be fixed ASAP, even if you have to take on debt to do it. Of course, debt means interest, which only compounds the cost further.

3. Inability to sell your home

Even if your deck takes time to break down or collapse, if you decide to sell your home before that point, you’re going to have problems. A deck that’s not up to code will dissuade sellers from considering the purchase. You’ll either need to have it torn down yourself before you put the home on the market, or accept a lower price in exchange for the buyer having to deal with it.

Either way, the addition meant to make your home more valuable will accomplish the opposite.

Badly built decks are far too common. In over 20 years of running a construction company, we’ve seen amateur decks plagued with a few main problems—all of them dangerous.

By its nature, a deck gets more exposure to the elements than you’d want the inside of your home to have. When connecting a new deck to the home, installing flashing is important to create a barrier that keeps water from entering the home. Novice deck builders sometimes choose to install aluminum flashing behind the main bandboard attached to the house. But aluminum has a chemical reaction with the pressure-treated material which causes it to deteriorate.

That undercuts its purpose of keeping water outside the house and leads to leaks. Most homeowners know too well the dangers a little bit of unwanted water can cause—rotting, mold, termites, ants—the potential costs and inconvenience is considerable.

While upgrading from aluminum to a more resilient material reduces your risk, if you don’t have the right experience, you may install flashing incorrectly. The right materials installed improperly will lead to the exact same problem as using the wrong materials. Either way, you could end up with costly and troublesome damages inside your home.

Not up to code

Local building codes exist for a reason. For some amatuer builders, they seem more like an annoyance to avoid than anything they should really bother with. But building a deck outside of code not only affects your home’s resale potential, it also increases your risk of deck collapse.

For example, the building code for Charlotte, NC decks prescribes specifics for how to attach the deck to the house. You either need an engineer-approved attachment, or the proper materials to do it right. An inexperienced builder that skips the process of getting the proper permits may fail to follow those procedures. A deck that isn’t properly attached from the house will eventually start to fall away—a sure recipe for accidents.

Nails may seem like a simple enough tool for a building project. But the wrong type of nails can spell disaster for your deck. If you don’t hire a contractor that understands the importance of buying galvanized nails in the proper size, the nails may rot away within a matter of years.

That’s not a minor issue. When your nails lose their integrity, the entire structure is compromised. The deck will pull away from the house and, in some cases, literally fall off completely.  Anyone standing on a deck when that happens could face grievous injuries, especially for any deck that’s not on the ground floor.

Support posts have an important role to play in keeping your deck functional and safe. When they’re not installed properly, the consequences can be severe. Badly built decks often have support posts of the wrong size or with incorrect lateral spacing, which causes the deck to sway (already scary!), then eventually fall (extremely dangerous).

Another common issue is when builders install support posts by putting the posts in the ground first, and then pouring concrete in around them. This faulty method of installation fails to protect the posts from water, leading to rot. The proper method is to pour the concrete above grade, and then put the posts in an approved base which keeps them off the ground.

How to Avoid a Deck Collapse (And More Minor Deck Problems)

You may have the skills to tackle other DIY projects during this time, but building a deck is a project that it’s far safer to trust to a professional. Don’t risk a deck collapse. Make sure your deck is built the right way the first time.

The best way to do that is obvious: hire a skilled contractor.

When you work with someone that has extensive experience building decks in the Charlotte, NC area, they’ll know all the local codes to follow, have experience with the permit process, and know the ins and outs of what materials to use and how to build the deck properly. That keeps you safe, and means you get to enjoy the deck you’ve been dreaming about.